As a Chinese, why do I travel far to Europe to buy porcelain

When it comes to buying porcelain in Europe, you might think I'm crazy. We were born in China, why should we travel all the way to Europe to buy China? But I heard that many Chinese middle-class and tasteful local tyrants have gone to this German town to buy ceramics.

I currently live in Dresden, which is a "famous tourist city in Germany", known as the "Pearl on the Elbe", and yes, there is also the "European Silicon Valley."

But today's protagonist is a small town not far from it: Meissen, which is only about half an hour away by train. Maybe you are unfamiliar with this name. However, like many low-key European towns, it has a history of nearly a thousand years since its founding (then China was in the period of the Five Dynasties and Ten Kingdoms, please experience how long it will be). It is also an ancient European ceramic Industry center. 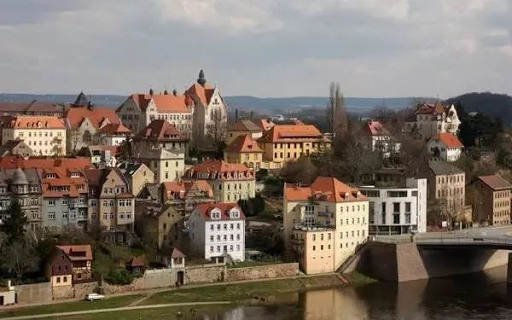 For hundreds of years, the artworks created by Meissen Porcelain Factory have been the objects of European royal celebrities. The well-known Empress Sissi of the Austro-Hungarian Empire is a loyal fan of his family. She has collected thousands of Meissen porcelains, which are worth tens of millions of euros.

In recent years, well-made Meissen porcelain has been occupying high-end prices in European auctions. In 2005, Christie was able to auction a pair of porcelain "Egrets" made around 1730 at a high price of 5.6 million euros (almost 42 million yuan), setting the highest auction record for Meissen's art. 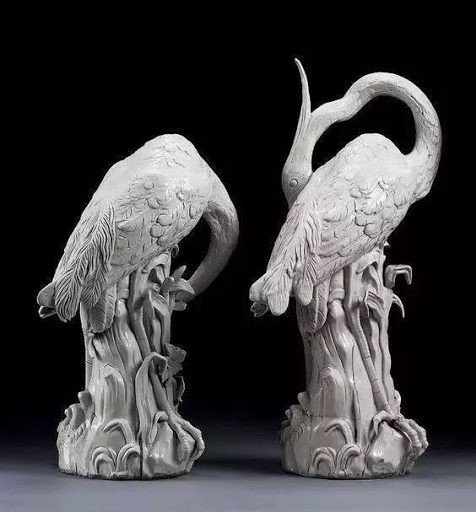 There is also a survey report that in 20 years, the appreciation space of investing in Meissen's art is even greater than that of gold, stocks or real estate. In the homes of many German friends, a piece of exquisite Meissen porcelain is almost like a family heirloom.

Meissen porcelain, a masterpiece of the "prodigal king".

In the 16th century, porcelain was introduced to Europe from China with the Portuguese caravan. The exquisite patterns and delicate touch fascinated the European aristocrats and wanted to produce their own China. However, the wisdom of the ancient Chinese people was not It is said that imitation can be imitated. In the following two hundred years, Europeans have been desperately researching and have not succeeded.

Then, important figures appeared: the king of Poland in the 18th century (and the king of the German state of Saxony, which is the state where Meissen is located, Europe is indeed small enough)-Augustus II. 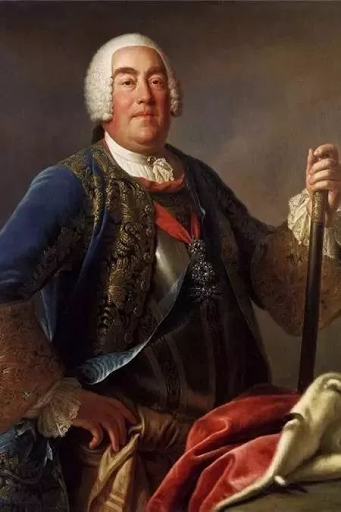 In terms of governing the country, he has done nothing, but his "prodigal" is famous in history. He likes to build exquisite palaces and churches, and he is crazy about porcelain. According to legend, he used 600 cavalry to exchange more than 100 pieces of blue and white porcelain from the Kangxi period with the king of Prussia at the time. 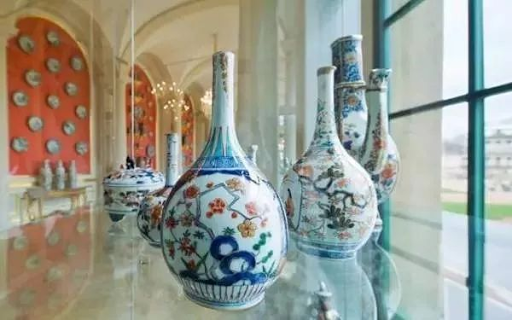 The picture is a corner of the exhibition. The porcelain on display is shocking enough in quality and quality, and this is only part of it.

Speaking of the invention of Meissen porcelain, it was a mistake. Since he was the master of the "prodigal", Augustus II was naturally very sensitive to alchemy and other ways of making money. He heard that there was a young man named Böttger who could alchemy and arrested him willfully. Coming, locked in the laboratory for alchemy. However, this young man has repeatedly let him down.

On the other hand, the mathematician Tschirnhaus is also experimenting with glass for the king, hoping to make porcelain. So naturally, Bertegel, who couldn't make gold, became an assistant to the porcelain research and development team. Unexpectedly, this combination actually succeeded.

However, Chienhaus was old and died early, so Bertegel's reputation as the "first man in European porcelain" was given to him. 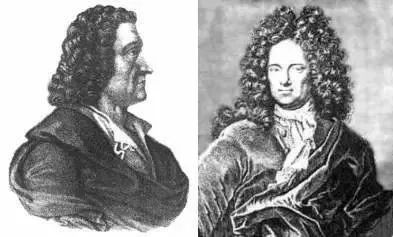 This broke the king's joy and immediately ordered a factory to be built. In 1710, the Polish Royal Family-Elector of Saxony-Porcelain Factory (here again is a long German warning! The original German name of this factory is: Königlich-Polnische und Kurfürstlich-Sächsische Porzellanmanufaktur, which is today’s Meissen Porcelain Factory Predecessor.

In order to keep the secret recipe, the craftsmen were locked in the castle.

So why is Meissen such a small town? The primary reason is simple. There are abundant kaolin resources here, and this raw material is indispensable for making porcelain.

Secondly, there is the issue of security. At that time, the making of porcelain was still a secret recipe, and Augustus the Great made a lot of money because of this, which was definitely more effective than alchemy.

How can such a way of making money escape? Therefore, Augustus the Great took aim at the oldest castle in Germany, Albrechtsburg, and transformed it into a hidden factory on the mountain, shutting down all relevant people: designers, scientists, and craftsmen. Up. 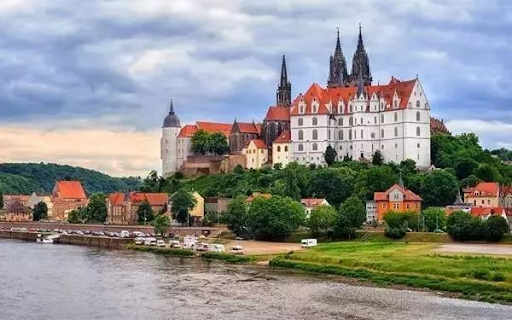 Everyone is locked in this beautiful castle.

However, there is no seamless wall in the world. There are still a few "German Shockshen" who have successfully escaped to Vienna, Venice and other places, and porcelain has gradually become popular in Europe.

For hundreds of years, the Meissen Porcelain Factory has changed many versions of the logo, but the main body is two crossed swords. This design has been in use since 1722. In my opinion, this is quite easy to understand. To a certain extent, this porcelain has become a symbol of imperial power and aristocratic privileges. For this reason, fights (wars) are indispensable. (No, people are locked up to make porcelain.)

I come from the hometown of porcelain, why should I buy china here?

For the Chinese, buying porcelain in Europe might sound strange? After all, China’s "Hometown of Porcelain" is an indisputable fact. When European porcelain started to imitate Eastern shapes, it was deeply influenced by Chinese culture. To this day, Meissen porcelain still produces many Chinese style products.

But obviously, Chinese style is not the reason for my purchase. Meissen porcelain-even the Chinese style series, has a different style from Chinese porcelain, which is tougher and more fancy. Well, European palace style. 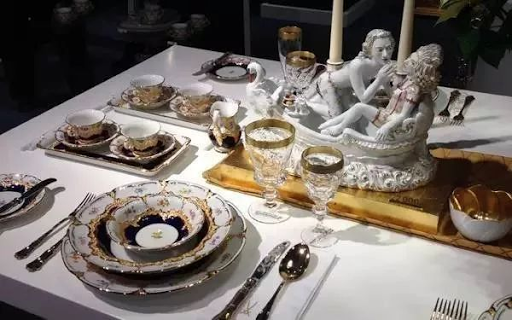 Feel the magnificent European court style with a full screen, taken at the Meissen Porcelain Museum.

My first buying experience happened after a German friend told me about the history of German porcelain. To find out, I visited the Meissen Porcelain Factory Museum.

This is not just a re-creation of color: Meissen has tens of thousands of patents on porcelain pigment formulations, which can enhance the coloring effect while staying true to the ancient production methods. 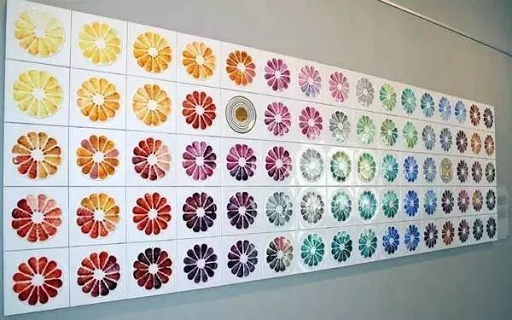 There is also the re-creation of patterns and creative techniques: on the one hand, the traditional imported porcelain styles are continued and transformed, such as blue onions and Meissen roses; on the other hand, the existing patterns are extended, transformed and merged, such as fusion of China Patterns and Western oil painting coloring techniques.

In this way, Meissen Porcelain gradually moved from imitating to its own path.

In addition, the modeling and drawing of each piece of porcelain was done by hand by technicians trained by Meissen himself. These technicians have not only mastered rich and proficient production skills, but also formed their own unique styles after going through at least three years to several decades of advanced studies. Therefore, each piece of porcelain has its own number, which can be said to be unique. 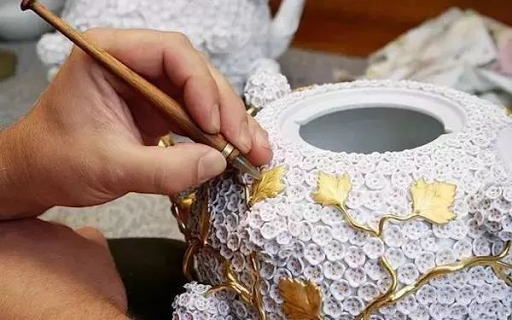 It should also be emphasized that the Meissen Porcelain Factory is owned by the Saxony state government and is one of the few publicly-owned companies in Germany. The technical property rights are greatly protected, so it is difficult to find counterfeit products on the market.

Augustus the Great’s fanatical love for Chinese dragons. The "Minglong" ornamentation is one of the important ornaments in Meissen's early days. It was designed by the Emperor Augustus himself. It is still in use today, such as the following "Colorful Dragon" series: 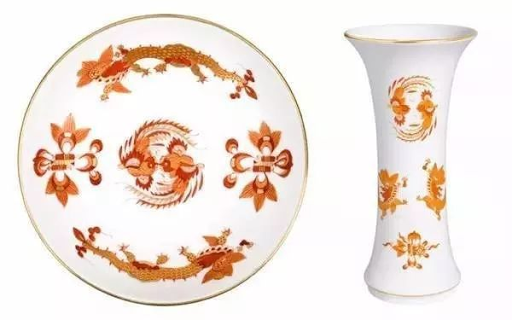 But this kind of Chinese style, for a real Chinese, is a bit of a sense of "like but not". This kind of "export to domestic sales" feeling is still a different experience.
Meissen messien procelain